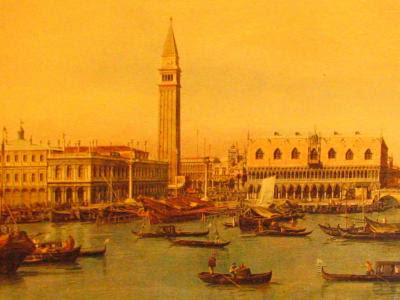 I stood in Venice, on the Bridge of Sighs; A palace and a prison on each hand; I saw from out the wave of her structure's rise As from the stroke of the enchanter's wand: A thousand years their cloudy wings expand Around me, and a dying Glory smiles O'er the far times, when many a subject land Look'd to the winged Lion's marble pines, Where Venice sate in state, throned on her hundred isles." --Lord Byron, Childe Harold (canto IV, st. 1)

Early years. The city of Venice was founded by refugees, subjects of the Eastern Roman (Byzantine) Empire fleeing the Lombard invasion of northern Italy in the seventh century AD. Although the city nominally remained subject to rule from the Byzantine capital at Constantinople, Venice's power grew until it became a de facto independent state following its breaking of a siege by Charlemagne's son Pepin in AD 811.
The Middle Ages. Under its elected doges (dukes), the Republic of Venice began its maritime empire with an agreement with the Holy Roman Emperor Lothair I, who granted Venice trading rights in exchange for its efforts to fight Slavic and Saracen pirates. This sort of arrangement -- military assistance for favorable trade concessions -- became Venice's standard method of extending its trade reach and wealth at home. In the 11th Century, for instance, Venice supported Byzantine Emperor Alexios I Komnenos in his war against the Norman states in Apulia, earning an exemption from taxes for all Venetian merchants doing business in the empire. These tax breaks were key in growing rich from lucrative trade in spices and silks between Europe and the Levant and Egypt.
The Crusades. Two hundred Venetian ships carried the troops in the First Crusade to the Holy Land. In return, Venetian merchants were granted virtual autonomy within the Crusader Kingdom of Jerusalem. Venetian ships were still needed by the time of the Fourth Crusade, but the crusaders were unable to pay. The Venetians made the crusaders work for their passage, first by re-capturing the rebellious city of Hadar in Dalmatia, then capturing and sacking the imperial capital at Constantinople in 1204. The sack not only enriched Venice -- it has been called the most profitable single sacking of a city in world history -- but gained the Republic important territories in the Aegean Sea.
The Renaissance. By the dawn of the Renaissance, Venice had a fleet of more than 3,000 ships, built at the Arsenal shipyard and had established the world's first-ever exchange business in Venezia. The Republic's power was spreading in all directions, with military conquests usually going hand in hand with increased trade and wealth. Even seeming setbacks were often turned to the Republic's advantage, however. For instance, when Constantinople fell to the Ottoman Empire in 1453, Venetian merchants not only managed to keep many of their trade privileges in the city, but eventually won similar privileges in other Ottoman ports. By the end of the Fifteenth Century, Venice was the second-most populous city in Europe (after Paris) and the richest city in the world, having grown rich not only on trade, but on its own homegrown silk, jewelry, and glassblowing industries.
Decline and fall. Such wealth and power was bound to create jealousy, and in 1508 Pope Julius II formed the League of Cambrai, an alliance of neighboring states set on removing some of the Republic's rich territories from its possession. The League would not last. Some territory was indeed taken from Venice, but Julius had a change of heart, realizing that Venice was the only Italian state capable of resisting the Ottoman Turks or a large European power like France. In the end, it was considered a military victory for Venice, but it marked the end of Venetian expansion.
Wars with the Turks, Austria, Spain and the Barbary pirates would mark Venetian history for the next two centuries. Meanwhile, Genoa and other Italian cities challenged Venice's trade superiority in the Mediterranean as Spain, Portugal, France and Britain found trade routes to the East that bypassed the ancient "Silk Road" through the Levant. The ships of the Age of Exploration were also much cheaper to operate than the galleys Venice had been using for a millenium, and could operate farther from shore, further shortening trade routes. Such ships also carried smaller crews and did not require the huge numbers of conscripted rowers the galleys needed. Venice's territory and fleet shrank, until only eleven ships remained to resist Napoleon when he marched on and captured the city in 1797. This marked the end of Venice's thousand years of independence; the city would pass back and forth between various Austrian and Italian kingdoms for the next ninety years until the formation of modern Italy in 1866.
Posted by Rob Earle at 12:01 AM 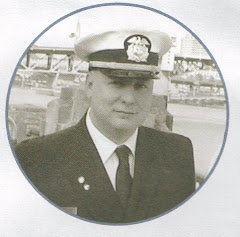